Last week L came to us and told us that he had a painful bump on his jaw. It was a hard, pea-sized bump on the right side of his face. My first thought was “It’s back. It’s back. He’s relapsed. We have to do it all again.” This is always my first thought when something happens with him. It will always be my first thought.

Maybe it’s nothing. It’s probably nothing. But given L’s history, we no longer have the luxury of nothing. We live in the maybes. Maybe it’s back. Maybe it’s a secondary cancer. And so, it must be checked out.

I called our pediatrician and requested an appointment. Our doctor was on vacation. Oof. Our back-up doctor was also on vacation. Double oof. If I wanted someone to see him that week, it would have to be with a new person. Great. I get to tell the whole story to a stranger and answer questions I have answered 1,000 times before. I get to explain, again, why it is so important that s/he examines him thoroughly, that s/he looks everywhere, for everything and if there are concerns they need to tell me. Now. If I wanted L to be seen that week, the new doc was my only option. I made the appointment.

Then, later that morning, in the back of my mind I remembered that our babysitter took the boys to their dentist appointments in July (best babysitter ever) and that L had a cavity that needed to be filled. It’s like in the cartoons when the word bubbles are floating around people’s heads. And he has a huge canker sore. On the same side as the pea-sized bump. I call the dentist. What side is that cavity on? (Poor dental health is just one of the side effects of all the chemo he got, but that’s minor compared to the alternatives, right?) And now my mind is in overdrive. Spinning with possibilities, holding on to the prayer that it’s not cancer, again. YES! The cavity is on the same side as the bump and the canker sore. So, odds are it’s just a swollen lymph node or an abscessed tooth. Wahoo! I’ll take it. 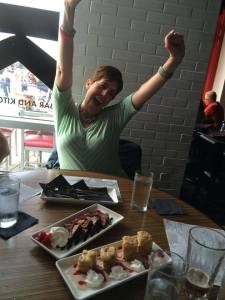 We go to the dentist a few days later. Thank goodness for our dentist. I really like him. He is thorough and kind. He is also a parent and he knows L’s history, so he gives us a lot of latitude. He lasers the canker sore (very cool, didn’t know they could do that. And we got to wear sunglasses while he was cauterizing L’s gums) but he thinks the bump should be checked out. Our eyes meet over L’s bony body that barely fills the reclining dentist’s chair. His mouth is covered by his mask so I can’t see his lips moving. But my eyes are searching, pleading and he knows what I am really asking. “I think it’s nothing. Odds are it’s the lymph node doing it’s job. But, this is not my area of expertise and given his history, I think you should keep the doctor’s appointment and get it checked out.” My stomach drops to the floor. Given. his. history.

We go to the new pediatrician the next day. She is ah-mazing (thank goodness!). Not sure if the triage nurse who made the appointment told her about L’s history, but the Dr. had read his chart. I didn’t have to tell the story, again. She knew most of it. And, she was very, very thorough. “I think it’s nothing. It’s not hot, red, he doesn’t have a fever. If you want to do bloodwork we can, but I don’t think it’s necessary. If it gets bigger and/or doesn’t resolve in two weeks, come back.”

wwwwhhhhhheeeeewwwwww. How does the world not hear the air decompressing from the balloon that has filled my chest for 48 hours?

Scare over. It’s not cancer. It’s a lymph node. He’s fine. (Almost a week later now and the bump is almost gone.)

Maudlin? Dramatic? Over-the-top? Yes. Yes. And Yes. And, completely exhausting. But that doesn’t make it any less real.

This is our life. We live in the limbo of maybe. Equally ripe with potential and dread, freedom and fear, reality and worst-case scenario.

This spring I read Lily Koppel’s book The Astronaut Wives Club about the Mercury and Apollo astronauts and the Space Race. Buzz Aldrin was chosen to be part of the crew that would make the first moon landing. In speaking about the months leading up to the actual launch, his first wife Joan said, “It was normalcy tinged with hysteria.” Yes! This! This is what I feel like as parent to a childhood cancer survivor. It is vigilance and paranoia. On the outside, everything is fine. Normal. He survived. We survived. We are…unscathed. But just beneath the surface is maybe.

Some days are better than others. Some minutes are easier than others. Most of the time, the duration of my freakouts is short. But, other days, not so much. I know too much. In the week that I waited to post this, a fellow Rhabdo mother posted that her daughter relapsed. The cancer is everywhere. The odds are not in her favor. Some of my 46 Mommas friends have children who are still in treatment, while trying to go to school. They have missed the first day of school because of fevers and low counts. Others have orthotic leg braces ordered & ready to go, but cannot pay for them because insurance won’t cover it.

It’s never over. The maybe lingers.

As September approaches and the childhood cancer community asks for your support, I hope that you will be moved. Moved to do something. Paint your nails gold, make your facebook profile picture a gold ribbon, donate to a childhood cancer charity, make a meal for a family, pray for families who are grieving. We need you. Help us turn “maybes” into true “nothings.”

One thought on “The Limbo of Maybe”