My #oneword2014 is risk. I took a huge personal risk by auditioning for the first-ever #MetroDetroit Listen to Your Mother show. I was hesitant to audition with a piece about childhood cancer. I was nervous that it was too serious, too sad. Our story is serious and sad. But it’s true and real. Our journey changed who I am and how I see myself as a mother. That is what LTYM is all about. Stories by, of, and about motherhood.

My risk paid off- I was accepted as a castmember and on May 4, 2014 I had the amazing honor and privilege of standing center stage and sharing my story. LTYM was one of the best experiences of my life. It helped me trust other women and other mothers. It helped me remember that there are good and kind people who will hold you when you need it. And, it gave me a boost of confidence as a writer.

Thank you to my amazing husband Sean for driving 85+ mph from MSU graduation to make it in time. 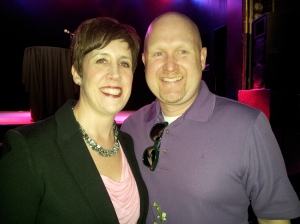 And thank you to my friends Heather and Kelley for cheering me on. 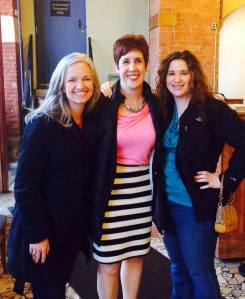 Thanks to my cheering section!

The official LTYM You-Tube videos will post later this summer. Eek! Until then, this is the full text of my piece. Thank you for reading.

“On December 12, 2008, our three year old son Luke was diagnosed with stage four cancer and our lives changed forever.

Many of my memories of diagnosis day are crystal clear:

the emergency ultrasound and MRI,

the ugly green sweater I was wearing,

meeting the oncology fellow who would be with us throughout Luke’s 15 months of treatment.

While my husband Sean played in the waiting room with Luke,

I somehow managed to sign paperwork giving strangers permission to pump my son full of poison,

in the hopes that the chemo would kill the rapidly growing cells inside his little body.

and we wept in the deafening silence.

December 12, 2013 marked five years since our son’s cancer diagnosis. Like every year, it was a hard day. I just could not pull myself out of being angry and bitter.

The gray skies and snow on the ground are triggers.

The winter air in Michigan always smells the same

Sean and I called each other a few times during the day. Family sent text messages saying they were thinking of us and sending good wishes.

Later that same night, Luke and his classmates performed “Betsy Ross and the First American Flag.”

Eighty-four second graders had been rehearsing since the second week of school. There was singing, dancing, and historical lessons about Betsy’s bravery and courage. Apparently, it was quite a coup to make a new flag that represented the new world!

Every single second grader had a speaking part and when Luke came up to the microphone to talk about Betsy buying blue ribbon for her flag, I thought my heart was going to leap out of my chest.

I was bursting with pride.

Surely the mom next to me could hear my heart pounding and see my tears. I wonder if she was thinking, “Who is this woman? What an odd thing to be crying about! Betsy Ross isn’t really tear-worthy!”

As I was sitting there trying to film the square dancing and the Virginia reel, a different movie played in my mind. Snippets of the last five years kept flashing before me.

In the movies, photo montages are usually round and sepia.

I remember midnight trips to the ER, fevers, watching my baby lose his curly hair, MRIs and X-rays, bacterial infections, the list goes on and on and on.

I wanted everything to pause,

for the world to stop spinning for Just. One. Moment.

so that everyone in that smelly grade school gym could appreciate my skinny, angular boy and his fight against the odds.

I wanted to stand up and shout,

Do you see that boy in the middle?

He is a CANCER survivor!

He is a cancer SURVIVOR!

As Luke’s mother, I know his beginning, his past, and our hopes for his future.

The audience could only see his present.

The farther out Luke gets from diagnosis and treatment, the less he remembers. I am learning that this is a good thing

and how it should be.

His eight year old mind and body have been through more than enough. If he copes by choosing what memories to keep, that is fine.

I will be his memory.

I will always have one eye on the past, remembering all he has endured and another eye on the future, hoping and praying that he continues to get good news.

Luke’s radiation oncologist once told me, “Your hopes and dreams for him aren’t gone. They’re just different.”

December 12th will always, always be the day that our son was diagnosed with cancer.

But, it can also be one of the days that he moved on, that he sang and danced with his classmates,

One thought on “Making New Memories, Five Years After”